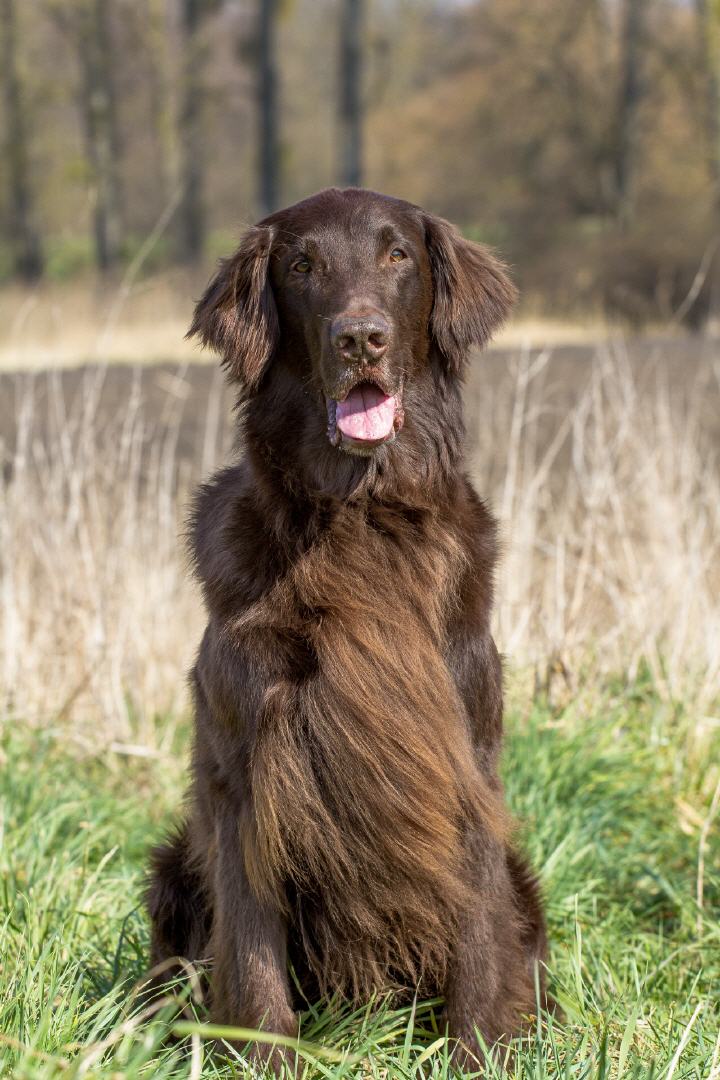 When we looked after a name for our dog, we thought "Jack" would be a good name. We had to consider, because is was the F-litter, that the name should start with "F", but it was the wish of our breeder, that the callname should appear within the kennelname. This was a tricky problem to solve, but we finally succeeded, choosing "Flying Flapjack", which we think fitted very well to our liver boy "Jack", who could really fly. Jack means "God is gracious" and he truly was, by giving us such a wonderful and talented dog! He lived up to his name from the beginning to the very end.

Jack was a charming and clownish dog and full of flatcoat temperament. When he was happy or awaited us to come home, he grinned, his whole body danced and he had to carry something in his mouth, whatever was available around. Nothing was sure from his wagging tail on the coffee table  we had to buy new dishes from time to time. But our blustery blizzard could also be very gentle. In the morning, when we woke up, he came and layed his head beside us and in the evening after a long training day, he wanted to be cuddled all over.

Jack loved swimming, playing, tossing and turning in snow, grass and sand, going on trips and visiting friends and family. But the greatest thing of all was, of course, working and he couldn't live without it. He always had this certain sparkle in his eyes, which he never lost. On his last day he gave his everything to retrieve two marsh beavers which Kristof had shot for him. On our way back to the car he broke down out of nowhere. We thought it was maybe his age and drove him to the vetenary clinic where they found out that he had a cancerous mass on his heart. This was devasting news but the next day there should follow further diagnostic so we left him in the clinic. We did not say goodbye but told him that the vet would look after him and that we would come back tomorrow. The vet promised to us she would call us immediately if his condition would get worse. At 00:31am on January 7th we got the phone call we did not want to receive. Jack had had another collaps and his heart had stopped beating. We drove to the clinic right away while they tried to get him back to life, frightened but not hopeless yet. But when we arrived, the vet could only tell us, that Jack had not come back. We couldn't hold back our tears, our always happy boy had left us. The farewell came so unexpected, too soon. But looking at it in retrospect, this exceptional dog had to have an exceptional death, he deserved nothing else. He will always have a special place in our hearts and we are forever grateful for everything he taught us and all the memories he left behind. We love him and we miss him dearly! He was the best first dog we could have ever had.